What is the Nurse Symbol Meaning? Learn the Top 4 Symbols & Origins!

While some of the universal nurse symbols have been replaced by more modern and efficient practices, the real origins of these medical symbols are both interesting and significant. Read on for an exploration into the nurse symbol meanings and their amazing origin stories!

Learn the interesting life story of Saint Agatha, the Patron Saint of Nurses!

The nursing caduceus is one of the most well known and longest lasting RN symbols that all of us know. The caduceus features a staff entwined by two serpents, sometimes with wings on top, and can be found on medical uniforms, equipment, and other paraphernalia. This symbol’s earliest origins were in Ancient Greece, where the caduceus represented the god Hermes. Similar symbols have been found in ancient India and the earliest human civilizations in the Near East.

However, this symbol was actually never meant to represent medicine at all. The ancient Greek symbol for medicine was a similar one, called the Rod of Asclepius.

The two are almost identical, but the Rod of Asclepius only features one snake wrapped around a short staff. Some scholars have suggested that this symbol was inspired by the practice of extracting parasitic worms from the body with a stick, a practice that still continues today.

For those who are interested in the history of the Greek God Asclepius, you can watch this amazing video that details how he became known as the Greek God of Healing.

The origin of the mix up goes back to the adoption of the caduceus as the symbol of the US Army Medical Corps in 1902. Since then, many commercial health organizations have used the caduceus instead of the Rod of Asclepius, though professional medical organizations tend to stick with the historically accurate single-snake and rod (and never wings!)

You can also find the Caduceus featured on some of our favorite nursing pins.

The popular image of the traditional nurse would be woefully incomplete without the ubiquitous nurse’s cap. Though these are not very popular in the United States anymore, they continue to form a large part of the tradition of nursing. In fact, there were two kinds of cap that evolved: the long cap, that covered most of or all of the nurse’s hair, and the short cap, that sits atop her head. The caps are white and starched, serving to keep hair out of the nurse’s face while she works.

The caps evolved out of the habit of early Christian caregivers called deaconesses. They wore white habits to distinguish themselves as medical practitioners among their religious communities. The headpiece transitioned from more of a veil to the cap we know today in the Victorian era. More senior nurse’s caps would typically be frillier and fancier than those of her subordinates, to mark her rank.

These caps also have practical benefits and drawbacks. They allow nurses to be easily identified, and represent the long traditions of nursing. However, they also serve as potential transmitters of disease within hospitals.

Related: Find all the NCLEX resources you need HERE.

These can be found in any of the great medical dramas of the 20th century, and countless classic movies, though their use has been mostly phased out in favor of the more practical scrubs. The traditional uniform typically consisted of a blue dress, pinafore apron and the aforementioned cap. It also sometimes included a nursing pin, for students, which signified which school the student was from.

Like the cap, these uniforms are also derived from early Christian nurse’s habits. As nursing transitioned from a religious to secular occupation, the mode of clothing was maintained, along with some of the lingo, like calling nurses “sister”. A student of Florence Nightingale designed to first of these uniforms, and they were widely adopted across the world.

Nowadays, the uniforms have been largely discarded for the more practical scrubs. However, clinical and sterile scrubs will never conjure up the same image and traditions as the spotless dresses and starched caps.

One of the relatively lesser known medical symbols is the oil lamp. While the other symbols evolved from ancient beginnings, this one is well documented and directly related to one of the most significant figures in nursing: Florence Nightingale. The lamp is often used during pinning ceremonies, when new nurses will hold up an oil lamp and recite a nursing pledge.

The lamp represents nursing traditions of selfless work and dedication. The significance goes back to Florence Nightingales’s service during the Crimean War (1853-1856). During this war, Nightingale transformed nursing from a profession for nuns and old women to a serious and respectable profession, not to mention one of the few open to women.

She would stay up late so often, tending to the wounded, that she became known as the “lady with the lamp”. Nightingale maintained that dedication even after the war was over, returning to London to start the first school of nursing and train a generation of women to be compassionate and share that same dedication. You can find the nursing lamp on many nursing pins for nursing pinning ceremonies to honor Nightingale’s efforts. 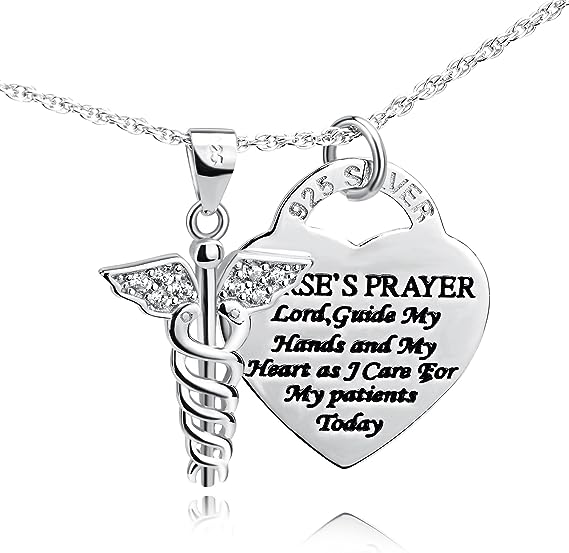 A great graduation gift for a special nurse in your life. 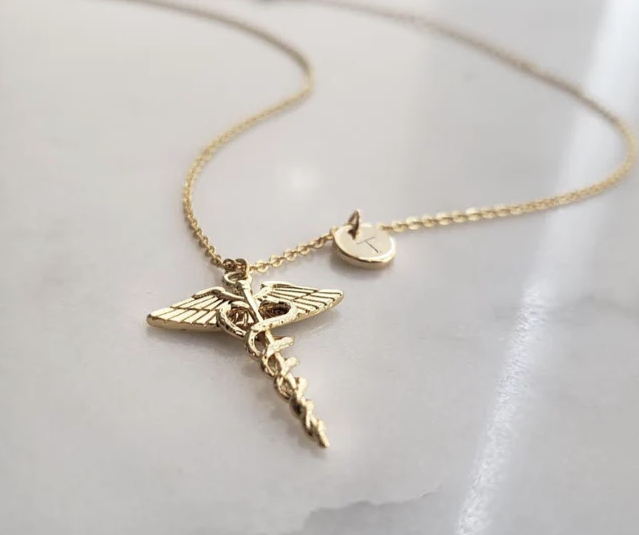 A beautiful reminder for nurses that they can get through this journey.

Buy at Etsy
We earn a commission if you make a purchase, at no additional cost to you. 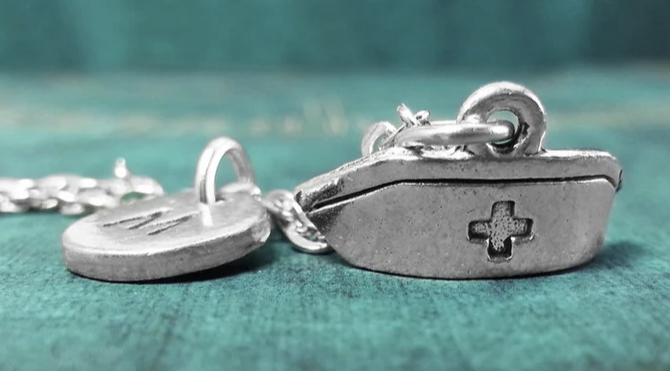 Buy at Etsy
We earn a commission if you make a purchase, at no additional cost to you.

What is the LPN symbol?

Generally speaking, the symbols for nurses is the same for LPNs. Typically, the Caduceus is the most recognized symbol for nurses.

Why does the medical symbol have a snake?

The prevailing theory is that the Ancient Greeks believed in the healing properties of snake venom and found their skin shedding to be a symbol of rebirth and renewal.

What does the nurse cap symbolize?

Nursing caps symbolize the goal of the nurse to take care of others. This is a relic of the head coverings that deaconesses wore when caring for the dying and sick.

When gifting flowers to nurses, you can gift “thank you” flowers including Campanula (bellflowers), roses, tulips, daisies, and hydrangeas.

What do these nursing symbols mean to you? Let us know by commenting below!

Are you applying to nursing school? Check out this list of 50+ healthcare scholarships!

Kristine is a teacher and the founder of Test Prep Nerds. She has dedicated several years to making prep resources and testing information available to all!